The History of King of Peace MCC

Weekly worship services began in 1975, with a group of 12 and have grown to a weekly worshiping body of 250 or more.

After outgrowing our three previous locations, the congregation purchased the Fifth Avenue Cinema building in 1990, and following a major two-year renovation, it became our current home.

Rev. Gloria Merrill was our first pastor. She was followed in 1978 by co-pastors Revs. Suzie Kliebenstein and Rickie Richards. Rev. Joseph Gilbert was pastor from 1981-83, followed by Rev. Jack Herman. Rev. Dr. Fred Williams served from 1984-1995.

In 1993, we founded and housed Metropolitan Charities, Inc., that provides programs and services for people with HIV/AIDS.  Now called Metro Wellness and Community Centers, it has grown into separate locations in Pinellas, Hillsborough, and Pasco counties.

From 1995-2006, Rev. Elder John Gill served as pastor. Jaye Sheldon, Director of Music, joined our staff in 2005, and Peggy MacLeod, our Director of Administration in 2007. Our current Senior Pastor, Rev. Dr. Candace R. Shultis, was overwhelming elected by our membership in December 2007, and arrived at King of Peace MCC in January 2008.

As the church continues to grow in the 21st century, we are committed to expanding our programs.  It is our goal to continue to foster and develop a community-centered diverse Christian ministry that is open and affirming and that celebrates and shares God’s love for all. 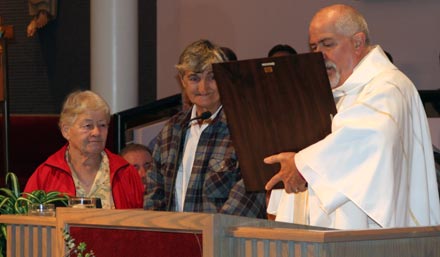 From 1980-85, King of Peace MCC services were held in a small yellow house.

In 1990, the congregation purchased the old Fifth Avenue Cinema building that still is our home today.